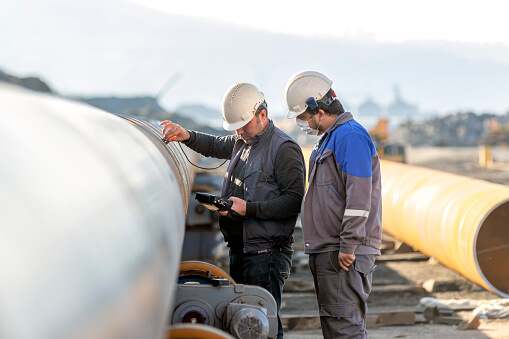 Non-destructive testing (NDT) is a wide group of analysis methods used to check, assess or test the state of materials, parts, components, structures, equipment, and various equipment without destroying the object under study.

These are very valuable methods that can significantly save both money and time-on-site assessment, troubleshooting, various measurements, and studies. Non-destructive testing methods can be applied to metals, plastics, ceramics, composites, cermets, and various coatings to detect cracks, internal voids, surface cavities, delamination, weld defects, and any other defects that can lead to premature failure of a structure or mechanism. Many non-destructive testing methods are capable of determining defect parameters such as size, shape, and orientation.

The purpose of non-destructive testing & inspection is to inspect the object under investigation in a safe, reliable, and economical way without damage to equipment or the need to stop the operation of the object. This is contrary to destructive testing, where the test piece can be damaged or destroyed during the inspection process.

Non-destructive testing methods are based on the use of conversion of electromagnetic radiation, sound, and other signals using special equipment.

In the acoustic (ultrasonic) method of non-destructive testing, sound waves are used to identify the size and position of defects, which are generated and directed into the material under study using a special piezoelectric transducer and which are reflected from the material boundary or defects, if present in the material.

Further, the reflected waves are recorded and analyzed by the transducer, and on the basis of the analyzed information on the display of the device, it is possible to draw a conclusion about the presence or absence of defects or deviations.

The magnetic particles can be a dry powder or liquid solution of magnetic powder, or they can be colored with color or fluorescent dye that fluoresces under ultraviolet light. To identify all defects, 2 checks are carried out – the first is perpendicular to the surface, the second is oriented at 90 degrees to the first position.

Non-destructive penetrant testing has long been one of the most reliable, efficient, and cost-effective methods for detecting surface defects in non-porous materials. When inspecting with penetrant substances, it is essential that the test surface is clean and free of any foreign material or liquids that could block penetrant penetration into open voids or cracks.

Vibroacoustic non-destructive testing refers to the process of monitoring vibration signatures of equipment or structures that are specific to a part of rotating machinery and analyzing this information to determine the condition of that equipment. Three types of sensors are commonly used:

Electrical methods of non-destructive testing are based on fixing the indicators of the electric field interacting with the object under study or appearing in the controlled object as a result of outside influence. The electrical method of non-destructive testing allows you to determine some characteristics of the material: density, degree of polymerization, the thickness of materials, and coatings.

Thermal/infrared testing is used to measure or display the temperature of a surface based on the infrared radiation emitted by an object when heat passes through or out of that object. Most infrared radiation is longer than the wavelength of visible light, but can be detected using thermal imaging devices (thermal imagers) called “infrared cameras”.

For accurate IR testing, the test portion must be in the line of sight to the camera and must not be covered by foreign objects or a lid, as the lids will dissipate heat and may cause false readings. When used correctly, thermal imaging can be used to detect corrosion damage, deposits, voids, inclusions, and many other defects and abnormalities.

Radiographic testing (RT) is a non-destructive testing technique that involves using either X-rays or gamma rays to view the internal structure of a component. In the petrochemical industry, radiographic testing is often used to check mechanisms such as pressure vessels and valves to detect defects.

Radiographic testing is also used to check the quality of welds. Many radiographic systems are compact and self-powered, which allows them to be used in the field.

Visual and Optical Testing as Methods of Non-Destructive Testing

As the name suggests, visual inspection involves visual observation of the surface of the object under study to assess the presence of visible defects and abnormalities.

It is not surprising that, in recent years, the development of non-destructive testing is increasingly becoming one of the most important and necessary conditions for industrial safety. According to statistics, every year in developed countries, due to insufficient quality of products, 10% of national income is “lost”. In the USA, losses from metal corrosion alone amount to more than $ 200 billion a year, plus more than $ 100 billion from fatigue defects. Most of the industrial products for various technical and organizational reasons quickly fail; taking into account the colossal repair volumes and violation of environmental standards, the loss of moral and material order increases significantly.